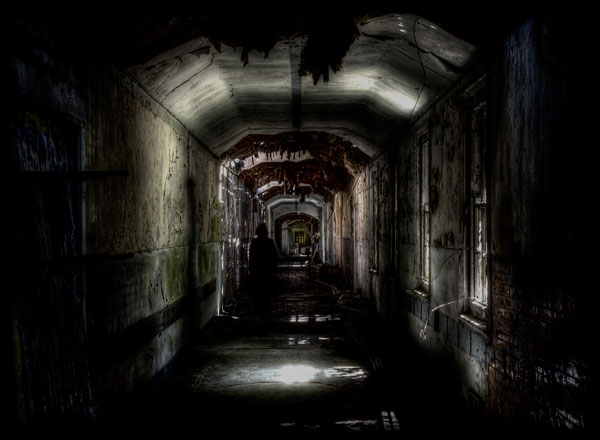 Growing up I had plenty of nightmares. In fact for me, after watching a scary movie at the age of 7, nightmares became a nightly thing for a very long time.

Luckily enough my second lucid dream during childhood came at the perfect moment to save me from a monster and at the same time add to the realization of how powerful lucidity can be.

In my dream I was running down a hallway at the top of a dark castle and behind me is some undefined monster chasing me. I cannot see it yet but in my dream I know it is there and it is catching up soon. I ran all the way down the hall to the wooden door at the end and opened it to find that it leads to the outside, only at the top of the castle, with nothing but a giant drop all the way down. As jumping was not something that my mind would even considered at that moment, closing the door and staying inside was my only option.

With the door behind me, facing back into the hall, I knew I cannot go back as the monster was approaching. This increased my fear into absolute panic and probably out of the sheer terror I snapped into lucidity and suddenly knew I was dreaming. Knowing that I immediately tried to wake up. I remember trying to open my eyes in the waking world with no success. This was only the second time I became lucid and did not know anything about how it works and what to do. I could not wake myself up.

Even though I knew this was a dream now, the dream was still going on, and as a kid i was still afraid. A thought came through my mind to try to find something that will wake me up, to find a connection between dreaming and waking. I then saw on the floor a sort of crisscrossing spring like in a toy fist gun. In my mind I knew this was somehow my way out (as it felt as if my mind created it after the previous thought). I picked it up and started twisting the spring until a spark came up out its corner, it’s light blinded me and in doing so woke me up.

I sat up in bed, breathing in relief. It was then obvious that becoming aware that a dream is a dream can be an amazing weapon against nightmare, even if only to help me wake up from them and stop the bad dream. Later in life I discover that lucidity in nightmares is much far more than a tool to escape your nightly fears, it is a key to face and overcome your daily fears as well.