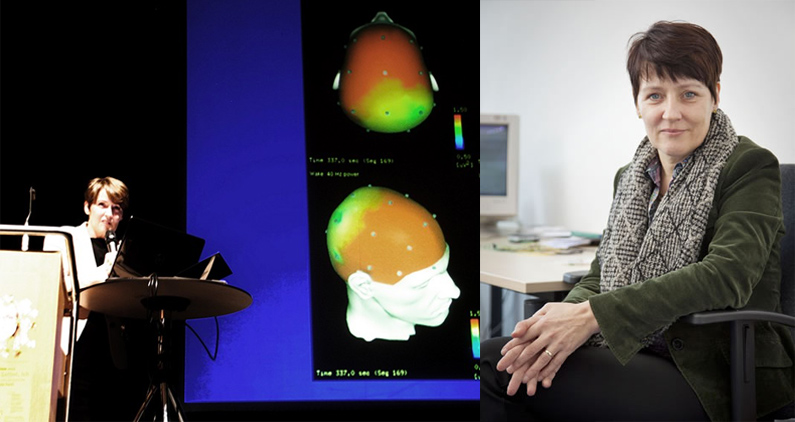 The following is an interview with Dr. Ursula Voss, lead researcher in the latest study of induction of lucid dreams through low current stimulation. This interview was conducted over several emails and I have edited it minimally for readability.

To study lucid dreaming is a scientific challenge that I took on with a great deal of scepticism and which turned out to be so very fascinating that I continued searching for answers to the many many questions we generate with our research.

I have had lucid dreams in childhood but thought nothing of it until Allan Hobson took me aside and told me “let’s do a study on lucid dreaming.” Then I thought he was joking. I did not want to go in that direction, scientifically, and didn’t think it could be done right meaning I did not believe we could actually collect objectifiable data.

What do you consider as some of the practical applications of being able to produce awareness in dreams that can come out of this research? Is there a potential to conduct “self therapy” (with guidance) by engaging with dream content, and perhaps the subconscious, directly?

Yes to self-therapy, and I receive many letters from traumatized individuals who have helped themselves successfully through ld (lucid dreams). As to the “subconscious”, this is deep water.

There has been some criticism or perhaps confusion in a couple of reports on the recent study (such as this Wired Article) in regards to the LuCiD Scale and how certain can we be of participants achieving lucidity via the low current stimulation. The questions was raised whether self reporting is accurate enough as well as a lack of clarity on the meaning of the numbers for INSIGHT for example. Would you mind clarifying that a bit? How would you describe in layman’s terms the confidence in whether subjects became aware and did EEG reading corroborate lucidity?

Did EEG reading corroborate lucidity? yes, actually the EEG was what we were interested in most of all. When we started we wanted to know if it was at all possible to force the brain to oscillate in a certain way. We found that yes, if you provide the brain with a certain frequency, it will resonate. If you use the wrong frequency for the state it is in at the time, it will not take up this oscillation or at least not notably. Our subjects were not asked “were you lucid?”. Instead, we read out the items of the LuCiD scale to them and let them answer those. Also, they provided a dream report. They often said things like “this was so strange”, “wow, what was that?” followed by a report on what was going on in the dream.

My understanding of what he is saying is that participants were asked about their “level of lucidity/awareness” (insight) on a scale of 0 to 5 but reported an average of 0.6 which seems low and to him indicates that it may mean that they did not become lucid. But then again, his last sentence indicates that he does not understand the content of the paper.

The person (whoever it is) is right! On an absolute scale, ratings are low. Relatively speaking, they are high. This is perfectly in line with the results from factor analysis on consciousness in dreams (the paper on the LuCiD scale). It is how it is: the person having a lucid dream in our studies is still asleep while having this dream. Perhaps, if you ask someone who is studying dreams acquired through WILD or MILD, the scores might be different. In our REM sleep induced dreams, this is what we find.

From your answer it sounds like the EEG is the main component in corroborating the lucid state rather than the questions posed to the participants.

No, what I was saying is that we are apparently serving 2 different communities. For consciousness researchers, the EEG finding was what we were excited about, for the ld community, the subjective ratings were the most important thing.

What was the most surprising finding for you in your research so far?

That lucid dreaming is a real phenomenon and that it is so especially frequent in the young.

What is next for you and your team and where does research on lucid dreaming go from here?

Next is clinical work, applying what we learned to help patients in overcoming their problems.